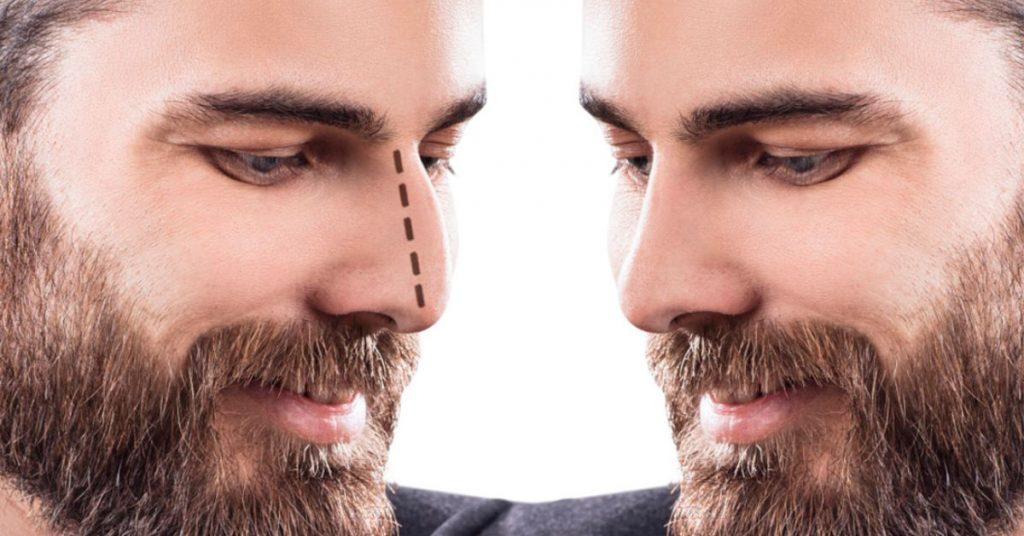 Male rhinoplasty surgery is becoming increasingly common with many men realizing that they don’t have to put up with having a nose which is unsightly or which they can’t breath through. The reasons for a male having a rhinoplasty are many and include the following:

Men often have had trauma to their nose, which results in them having a higher degree of problems with breathing through the nose. This trauma is commonly caused as a result of sport. Associated with this trauma comes the obvious changes in appearance of the nose. As a general rule it is recommended that you have stopped playing contact sport before having a rhinoplasty performed.

Before having a rhinoplasty it is important to establish what the goals of the operation will be. Common goals of male rhinoplasty include:

Dr Azim J Khan believes that the true art in male rhinoplasty is to give a patient an operation that is not obvious. Dr Azim J Khan prides himself on making changes with the nose that are subtle to the casual observer. This allows men to have a rhinoplasty without drawing attention to themselves. Several examples of male rhinoplasty are in the gallery of pre and postoperative photos.

Straightening the nose is a very common request for a male rhinoplasty. Most men have some degree of bending of the nose, which may be very obvious. Some men have broken their nose multiple times, which is the cause of the bend in the nose. Another cause of having a bent nose is that the nose has grown that way. It is possible that other family members also have a similar bend in their nose.

Straightening the nose is different for each patient and Dr Azim J Khan will tailor the operation to suit your needs. The general steps of the operation include:

A large hump on the top of your nose is called a dorsal hump. Almost everyone has a dorsal hump to some degree. Many men feel that their dorsal hump is too large and detracts from the rest of their face. A large dorsal hump was classically called a roman nose. Large dorsal humps can also be made more obvious with multiple fractures of the nose.

Dr Azim J Khan is able to run through preoperative morphing of images with you so he can tailor the reduction of the hump to what you want. The steps of the operation vary between patients but in general involve the following:

Men seek to have the tip of their nose refined so that it doesn’t detract from the rest of their face. A large or twisted tip can be very obvious and disfiguring.

Tip refinement is a true art form, which needs to be tailored to the individual. Historically patients would have a tip refinement procedure, which involved removal of all of the cartilage under the skin. This would look good for a few months until the skin started to sag and the end of the patient’s nose would take on the resemblance of a sultana. Thankfully this is no longer done.

The art of tip refinement is in decreasing the prominence of the tip of the nose without destroying the structural support of the nose. Men are very aware that they don’t want to have a small petite nose and Dr Azim J Khan has had advanced fellowship training in how to refine the tip of the nose whilst ensuring that it is not too small for your face.

The techniques used in tip refinement in male rhinoplasty vary significantly between patients. Some of the techniques that may be used include the following:

To further discuss any of these straightening your nose, hump reduction or tip refinement ensuring a natural look make an appointment to see Dr Azim J Khan.

PrevPreviousFemale Rhinoplasty
NextBlocked NoseNext
Copyright © 2004-2023 rhinoplasty.org.pk . All Rights Are Reserved
We use cookies on our website to give you the most relevant experience by remembering your preferences and repeat visits. By clicking “Accept All”, you consent to the use of ALL the cookies. However, you may visit "Cookie Settings" to provide a controlled consent.
Cookie SettingsAccept All
Manage consent

This website uses cookies to improve your experience while you navigate through the website. Out of these, the cookies that are categorized as necessary are stored on your browser as they are essential for the working of basic functionalities of the website. We also use third-party cookies that help us analyze and understand how you use this website. These cookies will be stored in your browser only with your consent. You also have the option to opt-out of these cookies. But opting out of some of these cookies may affect your browsing experience.
Necessary Always Enabled
Necessary cookies are absolutely essential for the website to function properly. These cookies ensure basic functionalities and security features of the website, anonymously.
Functional
Functional cookies help to perform certain functionalities like sharing the content of the website on social media platforms, collect feedbacks, and other third-party features.
Performance
Performance cookies are used to understand and analyze the key performance indexes of the website which helps in delivering a better user experience for the visitors.
Analytics
Analytical cookies are used to understand how visitors interact with the website. These cookies help provide information on metrics the number of visitors, bounce rate, traffic source, etc.
Advertisement
Advertisement cookies are used to provide visitors with relevant ads and marketing campaigns. These cookies track visitors across websites and collect information to provide customized ads.
Others
Other uncategorized cookies are those that are being analyzed and have not been classified into a category as yet.
SAVE & ACCEPT